Today is the day we say, “Thanks, Birth Control.” From the condom (both male and female), to the pill, to the IUD (intra-uterine device), and all the amazing methods in between, birth control helps women and men all over the world say, “Not right now,” when it comes to getting pregnant.

Whatever “Not right now” means to you, birth control is there for you!

Here are just some of the reasons we’re saying “Thanks, Birth Control!”

Check out all the awesome reasons people are saying #ThxBirthControl over on Twitter!

If you need help finding the perfect method for you, head on over to Bedsider’s  Method Explorer, where you can choose the factors that matter most to you!

Thanks, Bedsider and The National Campaign for the stats, graphics, and video! 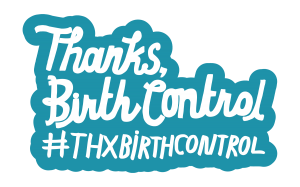